There is always a pivotal moment in a story – either someone’s life story or one that plays out on the pages of a storybook. An, “and then one day” moment, when the everyday norm completely changes for the better or for the worse.

Sometimes there are those who rewrite their own plot, like Dan Figler, who decided to turn one of the worst moments of his life into a bigger purpose to help others.

It was about 10 p.m. on Sunday, May 7, 2017. Figler was riding the motorcycle he had fixed up for the first time off of Burcale Road to visit his girlfriend at the time (now his wife, Lena), when a drunk driver T-boned him.

“The next thing I know, I woke up in the hospital,” says Figler. “To make a long story short, I was dead on arrival. … I later met the ambulance drivers, and they said, ‘I see a ghost.’ I said, ‘What do you mean?’ They said, ‘We tried two times to revive you. It didn’t happen.’ So I went to Grand Strand [Medical Center] and they tried to revive me one more time and, obviously, I came back, but I had so many injuries that they put me in an induced coma for a month.”

Needless to say, Figler’s story to full recovery is not a short one, but one packed with plot twists.

And one where he decided to rewrite what should have been the ending.

“Right after my accident, I saw and met with a friend that passed away 15-plus years ago,” shares Figler. “He was handicapped and in a wheelchair as a paraplegic. I had a moment where I met with him, and I knew it wasn’t my time. He told me some things that I then told his mother, who was good friends with my mom, and it made the hair stand up on the back of her neck. It made me a bigger believer.”

Moving from New Jersey to Myrtle Beach 12 years ago, Figler, 36, had always been a picture of health, fitness training and weight lifting – and winning awards for it – since he was 8 years old. He had also dabbled in fixing and selling cars and motorcycles on the side.

After his accident, Figler was fighting for his life. But physicians believe it was his power workout regimen that may have helped save him. His neck was broken, his sternum was broken, his jaw was broken on both sides, and his right eye socket was broken, leaving him with little to no sight in that eye. His jaw had to be wired shut for nearly four months, which meant many meals from a straw … and a huge weight loss.

“They were basically sending me home from the hospital in a wheelchair and telling me you’re on your own,” says Figler, who was told he probably wouldn’t walk again.

That was until his brother got Figler accepted into a rehab facility in Charlotte, North Carolina, where he would slowly, painfully, and deliberately relearn how to walk and talk over the next month. During this time, Figler also took his medicinal treatment into his own hands.

“They were giving me 30 different medicines per day,” he says. “And being in fitness my whole life, I know medicine is putting a Band-Aid on something. It’s not fixing the issue.”

Despite the advice from his doctors to keep taking the prescriptions and his abnormal reactions from those medicines, Figler started doing some research on more natural ways to heal through nutrition. Eventually, thanks to his family and girlfriend, Figler was nursed back to health.

“This was all life-changing for me,” he says. “My life turned upside down on May 7. On top of the pain, my energy level was super low, and I was in such depression not being able to do my fitness routine.”

The drunk driver who hit Figler that day left the scene of the accident in a car he had borrowed.

“The accident humbled me dramatically,” says Figler. “I learned not to stress over things you can’t control and that I obviously have a bigger purpose: to help people and spread the word on fitness and nutrition, while getting people into a positive mindset. Because the mind is a huge part of it. … I realized that if you think you’re going to be broken, you’re going to stay broken because your mind is telling you that. Your cells essentially react to your attitude. If you’re negative, you set yourself up for negativity. I’m alive.”

Today, Figler helps others through serious injuries and sicknesses surrounding physical, spiritual, and mental health struggles, as well as physical training, at his private Smash House Gym facility converted from his four-car garage in Myrtle Beach. It’s where he originally met Pastor JP and Mica Miller, who bought a punching bag from him two years ago and have been training with Figler ever since.

Post-accident, Figler also began to compete in powerlifting because, he says, “There’s a lot of haters out there. I want to prove that if you have an injury, you can come back from it – maybe to up and beyond where you were before.”

Figler has beyond proven his comeback story, breaking state, national, and world records in powerlifting competitions – even after all of his injuries.

“That was the fuel for me to keep going to push through the pain,” he says. “I describe to people how my pain feels like I jumped off the second story onto concrete on my butt. … This is just the pain I’ve started to live with and deal with. And I use it for energy to keep me going to stay motivated, to feed the fuel, and to keep on going until tomorrow.” 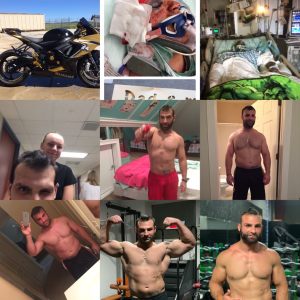